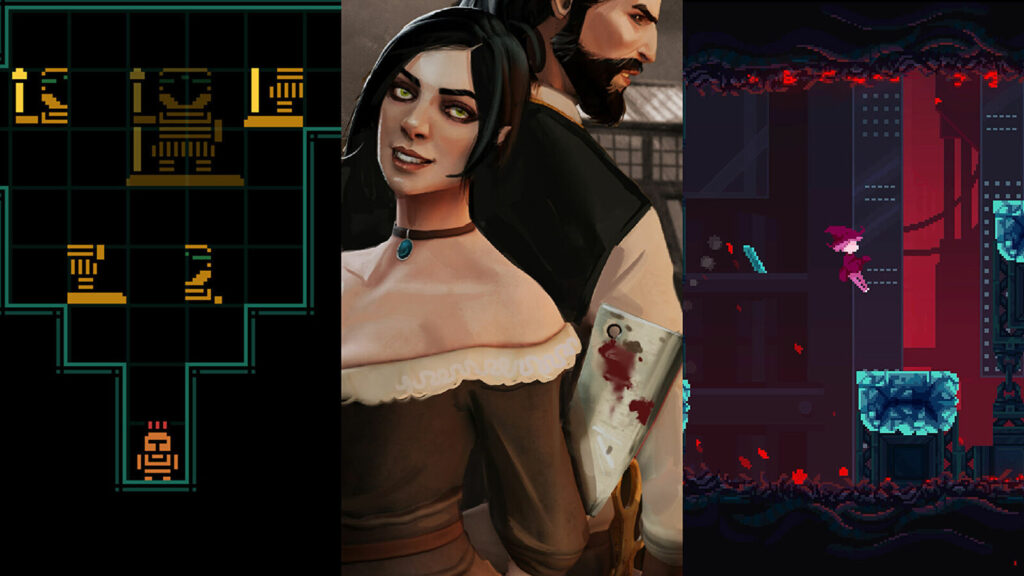 TFI Friday is a regular column where Alice Bee finds some new indie games and presents them to you. Enjoy These Fine Indies, on a Friday.

After you move house there’s a weird period where you keep trying to get pans out of the fridge or cutlery from a drawer that doesn’t exist. In fact, I’m lagging several years behind and still trying to get cutlery out of the drawer in my flat share in London four years ago. Yesterday I walked straight into the sofa for no earthly reason. In this time of doubt and not knowing where your own two feet are stepping, I present to you three new indie games to help you plan your footwork. And all for under a fiver! Howzat then?

I liked Sokobos immediately. There is an opening cutscene where a 2D little chonk of an ancient Greek man who takes up one square of the map, and moves like – well, like a character in a pixel-art sokoban game – walks past his wife (blip blip blip) to the edge of a cliff and stares wistfully out to sea, burdened with the weight of terrible purpse. It is very clear this is what is happening even though these are very small blocky 2D characters. It made me laugh a lot.

Your character in Sokobos is indeed burdened with terrible purpose. He has vowed to Zeus that he will build an amazing temple, all by himself. The game is thus a series of increasingly complex sokoban puzzles where you have to push all the bits together to make pillars, stone seats, pots. Sokoban meets a jigsaw, all in the style of what you imagine ancient pottery art would look like if rendered in an arcade cabinet. It’s great. Genuinely mind melting, and I have gotten stuck fairly early on, before it gets properly complicated. There are immovable obstacles, or obstacles you can push around (which really are just worse than normal obstacles. I’ve started having to colour my bits of stone by pushing them through puddles of paint before slotting them into place. You can skip any stage you like – and there’s support for colourblindness too – but I feel that isn’t staying very true to my vow to Zeus….

Ravenous Devils is a side on Sweeney Todd ’em up (the game even jokes about how your building used to belong to a famous barber) where you play a married couple who have moved into town to run two businesses. The bottom floor is a pub/cafe with attached kitchen, run by Hildred. It serves people. As in, people. Upstairs Percival is a tailor, where you murder clients in the back room, send them down the chute to the kitchen, and resell their clothes. Some of them you can turn into fertiliser for the greenhouse on the top floor. As a player you scroll between floors to send Hildred and Percival doing different things – and they don’t stack orders, so you can’t order Hildred to pick up a man-steak cook it, and then turn a body into sausages. You have to wait for her to pick up the steak before clicking on the oven, and so on. This means that when things fuck up, they fuck up a lot and very quickly.

I started playing this as kind of a joke, but you know what? This is bloody alright. It’s good plate-spinning, like a time-attack game, and you upgrade your business to open more revenue streams as you go. Plus the animations for Hildred putting people in the mincer are great. It’s not perfect – your recipe book is slightly random, and large enough that there’s no way to really plan ahead for orders. I also recommend waiting for as long as possible before upgrade your pub to have tables. You can almost make more money without ’em.

I have not, however, seen enough people pointing out that the tag line “the secret ingredient is crime” is a joke from Peep Show.

System Purge is a cool platformer where you’re a small witch trying to infiltrate a partly dormant science facility. I am unclear as to why, but I really like the slightly grungy look of the place. It’s some sort of post-apocalyptic setting, so the levels are partly metal and partly moss and silent, bobbing little mushrooms. This place is the titular system, and the purge refers to its attempts to get rid of you. This may not be a hugely original premise, but man if I’m not also really enjoying it.

Your jump has a satisfying little boing. It’s a bright bunny bounce of a thing that goes higher and slightly further if you hold the button down. Around you, lasers shoot up and big snap-traps prime their huge jaws to spring shut on you. Big crushers come down from the ceiling. You have to time runs just right, and it only gets harder the longer you play, of course – but restarts on death are instant. It’s a great tube of Pringles of a game that deserves a good scronch. Especially if you have a high tolerance for extremely hard platforming.