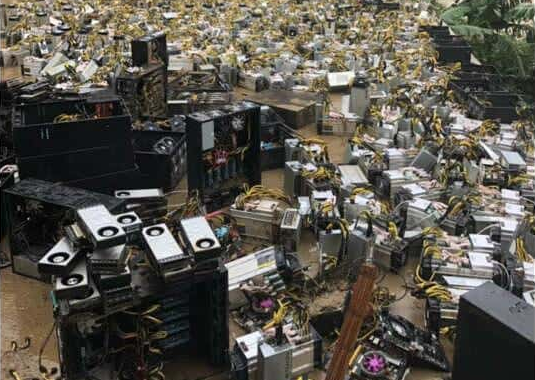 For most of the world, yesterday’s long-awaited Ethereum “Merge”—which took the cryptocurrency from proof-of-work mining to a proof-of-stake model—is notable for cutting Ethereum’s energy consumption by 99.95 percent. But for gamers, the Merge has already contributed to a dramatic shift in the market for GPUs and could continue to drive down graphics card prices going forward.

In recent years, crypto miners had been scooping up as many GPUs as they could to power their mining rigs, leading to short supplies and heavily inflated prices for consumers who just wanted better graphics on their PC games. That trend seems to have reversed itself in late 2021, though, as dollar-denominated prices for most cryptocurrencies began a long slide that made GPU mining unprofitable in many areas.

Prices for GPUs have already plummeted throughout 2022, leading to GPUs routinely going for significantly less than their MSRP on auction sites like eBay. GPU manufacturers have been left with an unexpected surplus of excess inventory.

Last month, Nvidia announced preliminary results suggesting weaker-than-expected demand for its high-end cards. “Changes to cryptocurrency standards and processes including, but not limited to, the pending Ethereum 2.0 standard may also create increased aftermarket resales of our GPUs and may reduce demand for our new GPUs,” the company said.

Nowhere to run to, baby

But a recent report found that pre-Merge Ethereum was responsible for a whopping 20 to 39 percent of crypto-asset electricity usage. That’s such a large share of the crypto mining space that all those miners moving to other tokens en masse would quickly lead to a glut of compute supply. That would in turn quickly drive down returns to the point where only miners with extremely cheap electricity could turn a profit.

We’re already seeing that cycle play out on Ethereum Classic. As miners started flocking to the fork post-Merge, the increased supply of compute power has already made it nearly impossible for miners to turn a profit.

Luxor COO Ethan Vera told The Block that only about 100 TH/s of Ethereum mining capacity would be able to “find a home” on other proof-of-work tokens after the Merge. That leaves about 90 percent of the previous Ethereum mining network that will “basically have no use for GPUs in crypto mining” post-Merge, Vera said.

“GPU mining is dead less than 24 hours after the merge,” Bitfarms Chief Mining Officer Ben Gagnon tweeted Thursday morning. “The only coins showing profit have no market cap or liquidity. The profit is not real.”