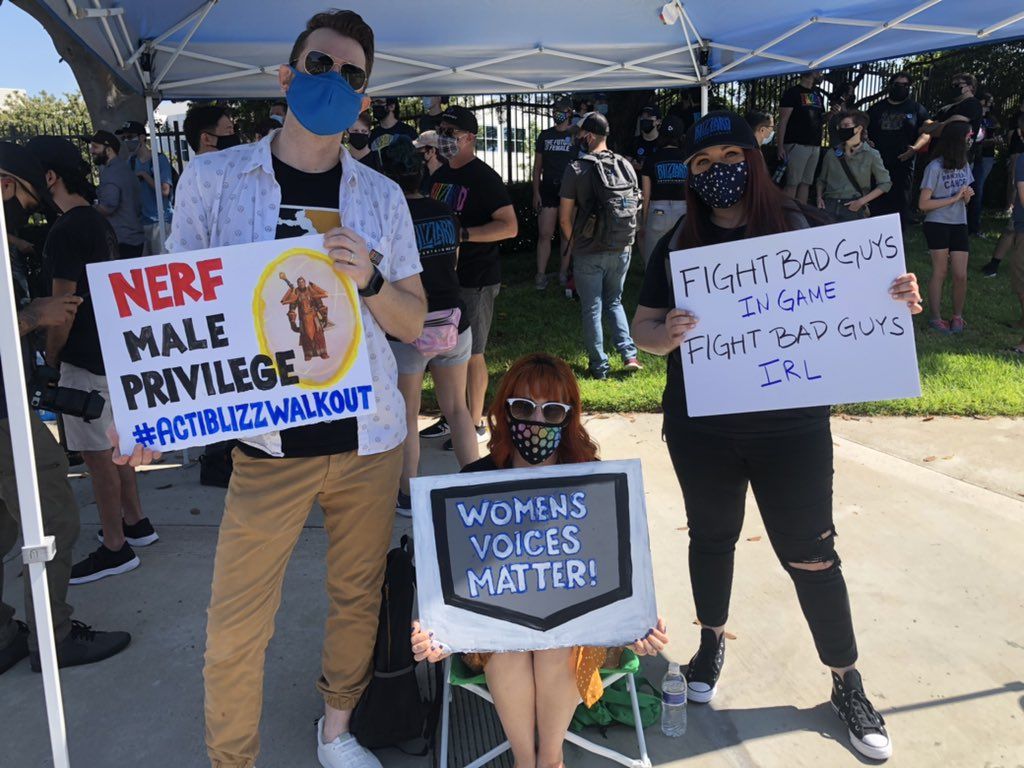 In response to a lawsuit filed last week by the state of California highlighting an alleged culture of sexual harassment and discrimination at Activision Blizzard, employees walked out of work today to demand change in the company’s culture and protest leadership’s initial response of fierce denial.

The planned work stoppage is underway, and several game industry figures, peers, and influencers have expressed solidarity with Activision Blizzard employees. Some are showing support by signal boosting the walkout on Twitter, while others are donating to organizations listed by organizers of the walkout that promote women in gaming (including Black Girls Who Code, Futures Without Violence, Women In Animation, Girls Who Code, and Women In Games International) or refraining from playing and streaming Activision Blizzard games today.

Those talking about the walkout on Twitter have been using the #ActiBlizzWalkout hashtag, usually accompanied by a blue heart emoji (?). Many current and former Activision Blizzard employees participating in the work stoppage have also changed their Twitter avatars to solid blue portraits matching Blizzard’s logo.

One notable Blizzard figure expressing support is Mike Morhaime, former Blizzard CEO of Blizzard Entertainment. “I stand in virtual solidarity with those in the #ActiBlizzWalkout. I promise to be part of the change. ?” Morhaime tweeted today.

Morhaime, a Blizzard co-founder who left the company in 2019 after 28 years, issued a statement last week apologizing for “failing” to stop employee behavior alleged to have occurred under his watch. Some employees found his statement unsatisfactory, suggesting “there was no way [Morhaime] didn’t know” about the toxicity and abuse employees were facing.

Bungie senior community manager Dylan Gafner also lent support to Activision Blizzard employees in a series of tweets. “Happy to lend a voice here, but please read and amplify information from those who have been impacted. It should not be expected that they carry the weight and responsibility of a better future. They deserve to be heard, especially when they were not in the past,” his second tweet reads.

Even though the lawsuit and its subsequent reactions have mostly centered around the executive and Blizzard sides of Activision’s business, employees from other Activision studios are participating as well, like Treyarch senior associate producer Karine Windy. “I’ve been an Activision employee for the past 11 years. Today I will take part in the #ActiBlizzWalkout with many of my colleagues. I support and believe every single one of you, every voice matters. ???”

Ubisoft dev and former game journalist Dan Amrich expressed support while sharing his experience leaving a job at Activision as a contractor. “When I left my contract gig at Activision, I was handed a copy of an NDA that will never expire. Then I got it via email. I was then mailed a third copy at home to be sure I knew I was never to speak about my time at Activision. I hope the #ActiBlizzWalkout creates change,” he said.

Among the supporters with the biggest followings are influencers known for playing Activision Blizzard games. Some of the biggest names in the Blizzard community are refraining from playing Activision Blizzard games today (and in some cases, for the foreseeable future) to express solidarity with the work stoppage, including: Overwatch streamers Flats and Stylosa, WoW streamers sonii and cdew, PC Gaming Show host Sean “day9” Plott, Fitzyhere, and popular Hearthstone streamers David Caero and Brian Kibler. As of this writing, Kibler is playing Magic The Gathering instead.

Last night, just a day before the planned walkout, Activision Blizzard CEO Bobby Kotick published a letter to employees that backtracked from the company’s initial “tone deaf” response. The letter outlined a list of actions the company would be taking, including the termination of “anyone found to have impeded the integrity of our processes for evaluating claims and imposing appropriate consequences” and updated hiring practices that will ensure its diversity directives are upheld. Activision Blizzard employees responded to Kotick’s letter this morning, noting Kotick’s failure to address several of the issues brought up by employees in the past week.

“Today’s walkout will demonstrate that this is not a one-time event that our leaders can ignore,” employees wrote. “We will not return to silence; we will not be placated by the same processes that led us to this point.”