Home » This 325″ display costs as much as a new helicopter

This 325″ display costs as much as a new helicopter 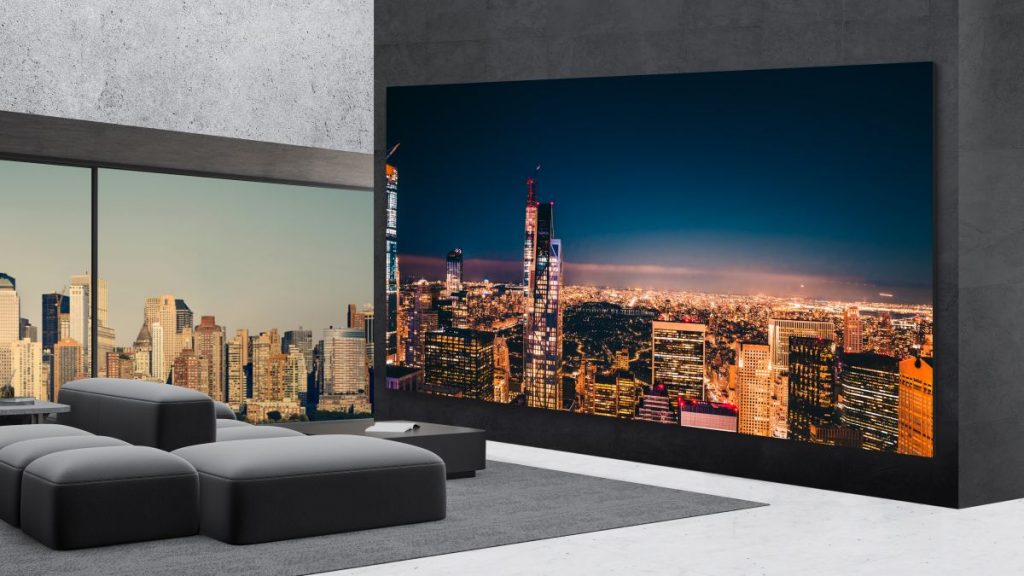 Is there such a thing as a display that’s too big? LG’s new line of Direct View LED Extreme Home Cinema displays are the latest to test that question, and the most expensive setups cost as much as an actual movie theater, or somewhere around the price of the helicopter you might want to use to airlift your new TV through your roof.

Yes, these are real products that LG is selling to anyone with a big enough bank account. And while the power draw, nightmarish upkeep, and need for neck stretches before you play Deathloop are all scary to think about, having a stupidly large television with its own orbit is a hell of a flex.

The sizes for this family of theater displays start at a massive 81 inches and go all the way to 589 inches of high fidelity overkill with resolutions ranging from 2K to 8K. They’re the most absurd displays we’ve seen from LG since they showed off an $87,000 rollable OLED TV last year. The thing that makes Direct View LEDs better than your usual LED TV is that they offer higher brightness and contrast and are designed for rooms with lots of windows (you know, like your giant glass mansion) and high ambient lighting.

If you’re more of an ultrawide enthusiast, you can go with the Dual4K ultra-stretch screens, which combined, span 589 inches of the living room wall or over 70 feet of Doom Eternal if that’s an easier visual.

Anyone looking to future-proof their mansion’s game room should look into the 325″ 8K Home Cinema Display and put your local movie theater to shame with its vast 160 degrees viewing angle. The display weighs over 2,000lbs and has a brightness of over 1200 nits. Sunscreen not included.

Each screen will ship with a controller loaded with LG’s WebOS, LG’s high-resolution content playback interface, which is fancy TV talk for a box where you’ll plug in your PlayStation 5 or extreme gaming PC or stream all your favorite shows.

“This truly is the supercar of home display technologies, offering hand-constructed quality and performance that appeals to those with luxury lifestyles who want something that is not only immersive but also highly exclusive,” said LG Electronics USA’s vice president in charge of DVLED displays, Dan Smith in a press release. “LG DVLED Extreme Home Cinema Display technology is rated to last 100,000 hours before reaching half-life, meaning that it could deliver stunning visuals for over ten years.”

Once installed, you’ll be given on-location training, twice a year ‘health checks’ for three years, and LG Connected Care (which lets LG remotely monitor your display performance), and a five-year warranty. These services are valued at around $30,000, according to LG.

You might be wondering how much these ridiculous screens cost? Well, Smith told our buddies at TechRadar that the Extreme Home Cinema will start around $70,000 up to $1.7 million. That’s right, for the price of a modest yacht, you too can host the most impressive LAN party in history.

Unfortunately, you won’t be able to walk into a Best Buy and load one of these displays in the trunk of your car. The LG DVLED Extreme Home Cinema Displays have to be specially ordered through LG, which I’m pretty sure involves a credit check.