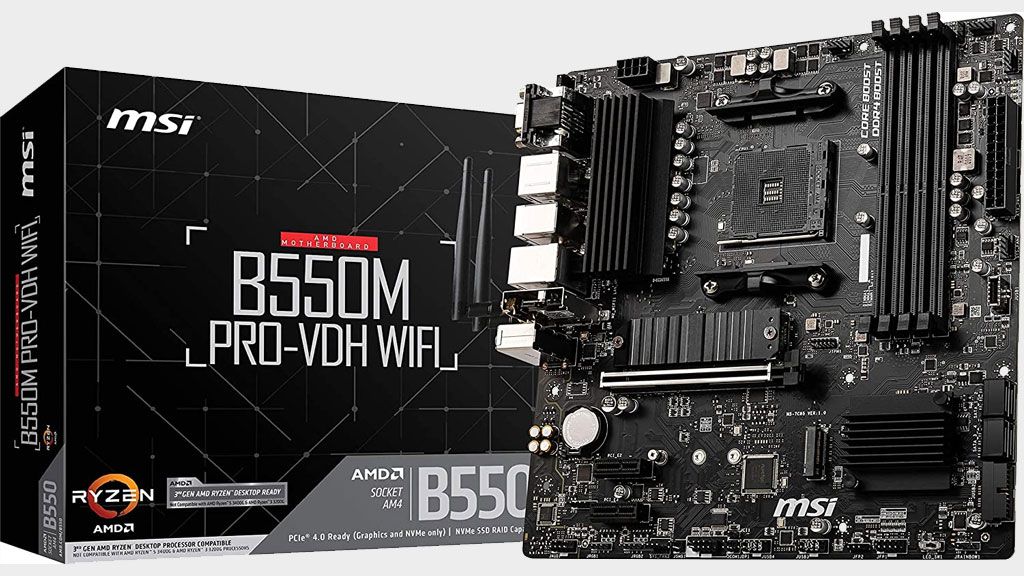 If you’re looking to build a PC around AMD’s Ryzen processors—and many people have been, based on sales trends at multiple popular retailers—MSI’s B550M Pro-VDH WiFi is worth a look. It’s a micro-ATX motherboard, so you could piece together a small form factor PC that doesn’t take up a lot of space, and it’s on sale at Amazon for just $83.99 right now.

That’s $56 below its list price, and a solid value for what it brings to the table (spec for spec, it hangs with some of the best motherboards for gaming). The timing is also great, with AMD’s latest generation Ryzen 5000G APUs landing on retail shelves. These chips pair Zen 3 CPU cores with integrated Radeon graphics, the latter of which can tide you over until discrete graphics cards become more readily available at sane price points (read: anywhere close to MSRP).

MSI B550M Pro-VDH WiFi Motherboard | $83.99 at Amazon (save $56)
This micro-ATX motherboard would be a great foundation for a small form factor gaming PC, and you could pair it with a Ryzen 5600G or 5700G APU to hold you over until you can get your hands on a discrete GPU.View Deal

As the model name suggests, the B550M Pro-VDH WiFi is built around AMD’s budget-friendly B550 chipset. This one doesn’t normally sell for under $100, but it’s priced that way now, making it a great candidate for a compact build focused on getting a lot of bang for your buck.

Some notable features include four DIMM slots supporting up to 128GB of DDR4-4400 memory, two M.2 sockets for high-speed storage, four SATA 6Gbps ports, a PCI Express x16 slot for when you finally get your hands on a discrete GPU, and a decent selection of USB ports.

It also includes some amenities normally reserved for pricier motherboards, like a built-in M.2 heat spreader, onboard Wi-Fi, and BIOS flash button that makes it easy to update the BIOS without a CPU installed.

Speaking of the BIOS feature, you may need to update it if you plan to pair this board with a Ryzen 5000G series APU. It just depends on how long Newegg has been sitting on its inventory. A BIOS update released in late June (7C95v28) adds support for the 5000G series, and there is also a beta BIOS (7C95v291) released today that is supposed to improve stability.