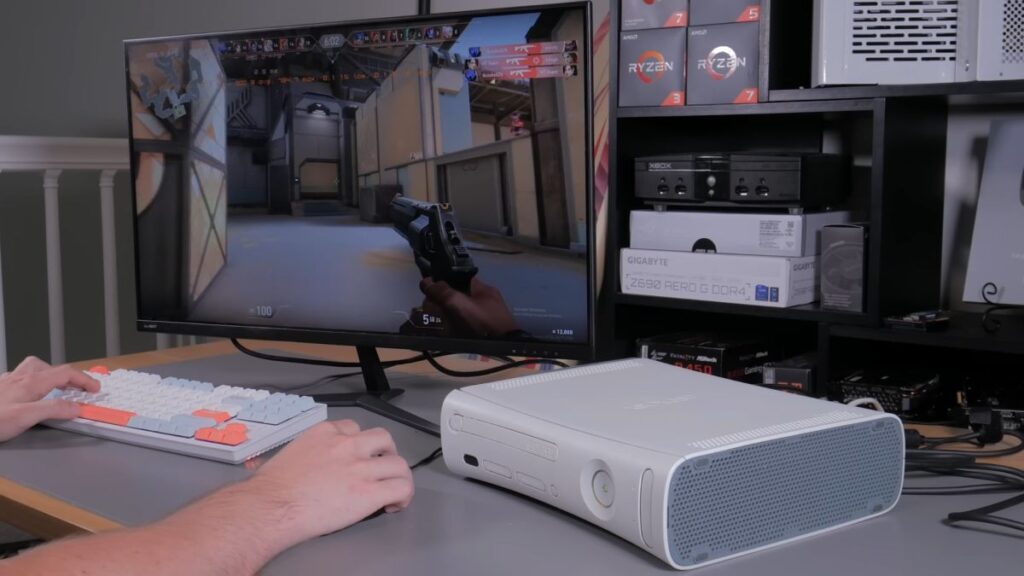 PC cases these days are all about showing off: tempered glass panels, RGB lighting, sleek metal designs like alien spacecraft, the works. Many builders, however, buck the trends in order to create the most ludicrous “sleeper PCs” with high end hardware cloaked in outdated or unassuming cases, like some kind of warrior monk incognito.

Enter YouTuber Tech By Matt (opens in new tab)‘s Ryzen, RTX gaming PC in the, uh, hottest small form factor chassis around: the OG Xbox 360 case. Those original model 360s were decimated by the Red Ring of Death, a hardware failure brought on by the console’s poor ventilation frying the components with excessive temps. In an act of hubris out of a Greek tragedy, Matt gutted his childhood console that’s survived since ’09 and replaced the innards with bigger, stronger, hotter components that were never meant to squeeze in there.

He largely hollowed out the inside of the console and even a little bit of one of those curved, fancy-looking hard drive expansions you could get (it’s just a standard 2.5″ HDD buried in there at the end of the day) to make room for all the components. Demonstrating admirable attention to detail, Matt did resolder and rewire the front daughter board of the console, leaving it looking a little like the Pokémon Tangela but also allowing the power button and green LEDs to work with the new system.

The PC inside is running a Ryzen R50 5600x processor, RTX 3060 graphics card, and 32 GB of RAM. There was no question of cramming a power supply in there, so Matt opted for a similar solution to the original 360⁠’s deadly bludgeon of an external power brick (opens in new tab), in this case a gaming laptop charger hooked up to an internal power converter in the console.

The end result is snug and hot like a cabin on a cold winter’s morn. It runs games as well as you’d expect from current-gen hardware, but it also clocks GPU temps north of 80° Celsius, and CPU temps consistently in the mid to high 90s. Matt mused about potentially rigging up some higher intensity server fans⁠—the same solution that saved YouTuber Shank Mods’ Hot Wheels PC (opens in new tab)⁠—but for now the builder’s saying mission accomplished. If you’re interested in other projects by Matt⁠—like a similar build in a Gamecube (opens in new tab) chassis⁠— you can check out his YouTube channel (opens in new tab).