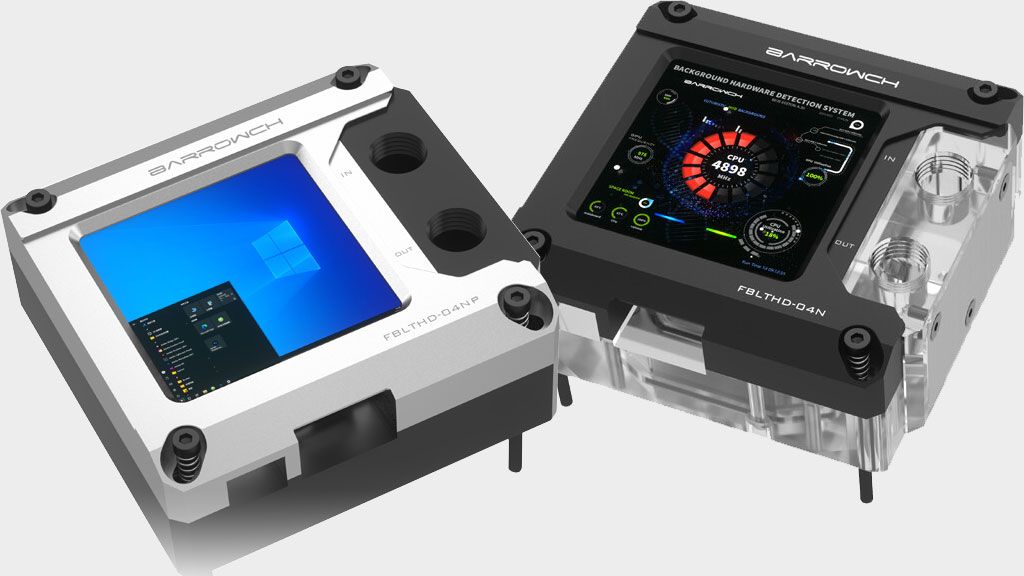 Sometimes it can feel like if you have seen one all-in-one (AIO) liquid cooler, then you’ve seen them all, with only minor variations in appearance from one to the next. Barrowch, a cooling product maker in China, found a way to stand out from the crowd: Put a high resolution display on a series of modular CPU water blocks, each complete with an HDMI port.

Having an LCD display on water blocks is not a new concept, but an HDMI port? That has not been done before, at least that I am aware of. And for a water block, these are fairly large displays, measuring 2.9 inches. That’s more than 21% bigger than the 2.36-inch display on NZXT’s Kraken Z series, though smaller than the comparatively enormous 3.5-inch full-color display on the Asus ROG Ryujin II 360.

That works out to 702 pixels per inch (PPI), a staggering pixel density that bests most smartphones. To put it into perspective, the gorgeous OLED screen on Samsung’s Galaxy S21 Ultra has a 515 PPI, while Apple’s flagship iPhone 12 Pro Max boasts a 458 PPI.

Pixel density isn’t the end-all-be-all, of course. For example, LG’s 27GN950-B is one of the best gaming monitors, but the pixel density on its 4K panel works out to ‘just’ 163 PPI. But it underscores just how wild it is to have a 1440p resolution on such a tiny (by gaming monitor standards) screen.

As to how you could make use of all those pixels crammed onto a 2.9-inch screen that resides inside your PC, Barrowch has some suggestions. The obvious one is displaying system vitals. Barrowch says the block’s display is equipped with a variety of dynamic and static templates, and can also sync with AIDA64, a popular system diagnostic utility that rose from the ashes of Everest. Which, by the way, *fist-bump* if you remember Everest (the utility, not the mountain).

More templates are coming, Barrowch says. Additionally, users can tap into the HDMI input to display a PC screen. To what purpose, I’m not really sure, but it’s a nifty capability (I’m sure someone can think of a clever way to leverage the feature). There’s also a micro-USB 5V interface, which is required for using it as a secondary display.

Navigating Barrowch’s website is a bit of a challenge (the manufacturer really likes slow-loading images in place of text), but it looks like there will be different water blocks sold as standalone units, and as part of AIO kits, like the CPI-T. The idea is to support various platforms, with one of the pictures showing a rectangular block that is probably aimed at Alder Lake.

There’s no mention of pricing or exact availability, only that these neat water blocks are “coming soon.”