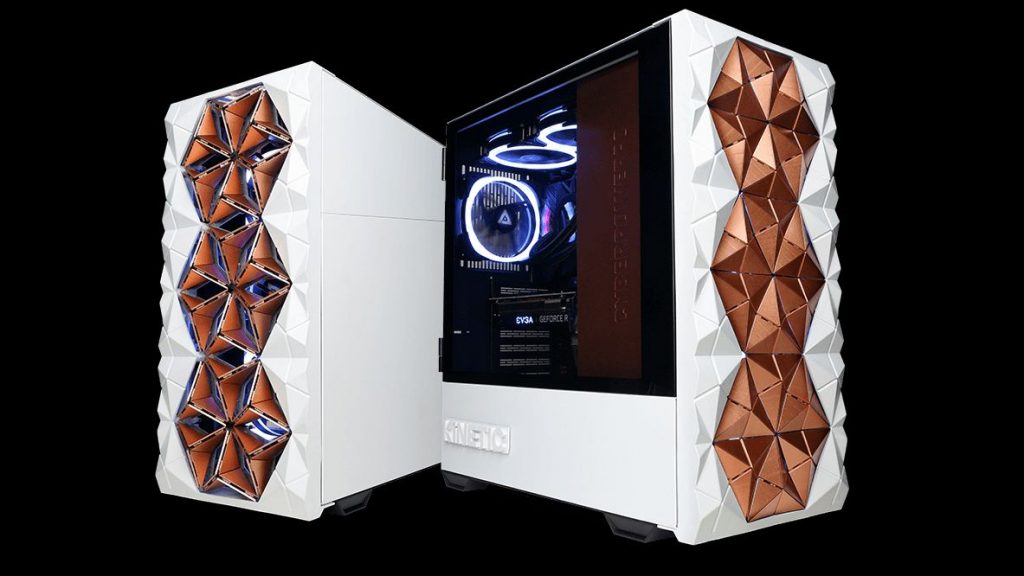 I love this uncalled-for new PC case with expanding and contracting vents that react to the machine’s ambient internal temperature. The Kinetic Series case comes from CyberPowerPC, which swears that it didn’t stick irises of Deus Ex triangles on a PC just because it looks cool. In fact, it’s not even supposed to look cool.

“We’ve pushed ourselves to think beyond the aesthetics and put more consideration into honest, functional design that has purpose,” says CyberPowerPC creative director Nam Hoang in the reveal video above. “We asked ourselves, can a chassis do more and be more than just a box of holes?”

In other words, I’m a little skeptical that aesthetics weren’t considered when designing the CyberPowerPC Kinetic Series case. It seems to me like it’d be a waste to own one without positioning it in such a way that the Control-esque vents are visible on your webcam.

There could be something to it, though. If the closed vents truly reduce fan noise and dust intake during the many hours when a PC is relatively cool (whenever it’s not running a game), I will accept that the articulated triangles genuinely serve a purpose.

I suppose I’m not the best judge of these things: My PC is screwed into an open air aluminum chassis. The only function of the chassis is holding my PC, which it does perfectly. I am clearly one of the “modern minimalists” that CyberPowerPC is overcoming with this design.

While I do love the concept whether or not it’s gratuitous, I don’t like the look of the actual triangles, which have a dull 3D printed plastic quality. Perhaps this is just the start of a new trend in PC cases, though. Move over transparent LCD side panels: It’s time for PCs to begin their long evolution into mecha. (A more extreme approach is the custom ‘breathing’ PC we saw last year.)

You can find more about this case, which is “coming soon,” and CyberPowerPC’s other CES reveals on its website. And here’s the rest of our CES 2022 coverage, including some big announcements from Nvidia and AMD.