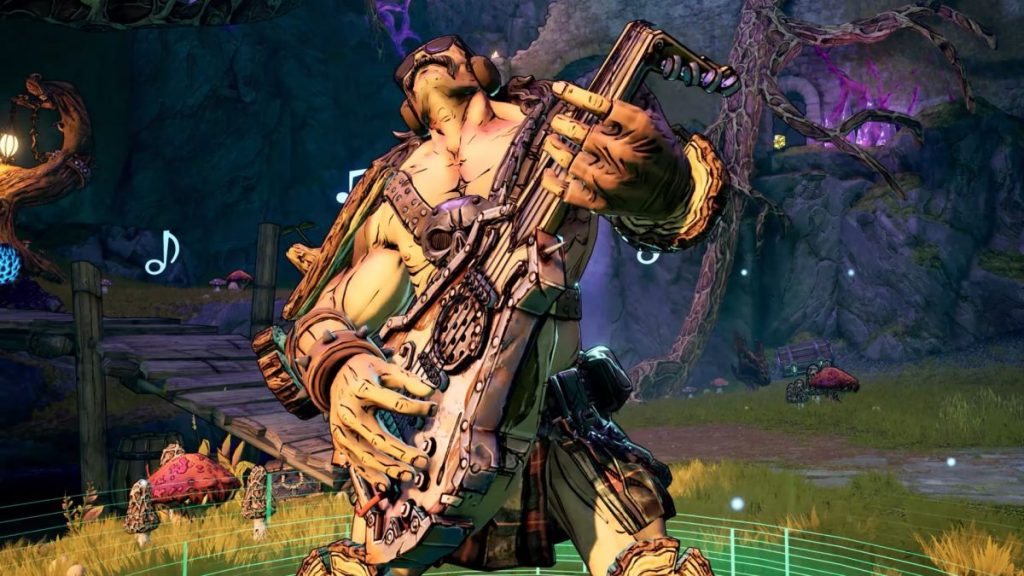 The trailer gives us a first look at Tiny Tina’s D&D-inspired world of magic, walking skeletons, and dragon lords. Players will join a party of characters playing Tiny Tina’s tabletop game, set in a much more traditionally high-fantasy setting. There’s a giant castle, giant mushroom forests, underground caverns, and troll-filled mountains. I’m particularly fond of the giant skeleton partially buried in the side of a mountain.

Of course it’s not a Borderlands game without a ridiculous amount of weapons and goofy enemies to riddle with bullets. The trailer shows off little evil mushroom men, giant crabs with chunks of pirate ships for shells, and bipedal sharks among others. You’ll be fighting these dudes with magical bows shooting several arrows of light at once, plus numerous melee weapons of the axe, sword, and mace variety. This is the first time modern Borderlands has offered melee-only weapons, so it’ll be interesting to see how they shake up combat.

Speaking of shaking things up, players will have magical abilities like summoning several meteors to rain down on baddies, turning enemies into floating sheep, and freezing flying enemies out of the sky.

It looks like Tiny Tina’s Wonderlands will also contain some sort of D&D-style overworld, where miniature versions of your characters run around to visit different locations and find loot. It’s got a cute art style, with some of the usual garbage you’d find spread around a D&D table acting as props, like a spilled orange soda forming a river or a red thumbtack marking a location.