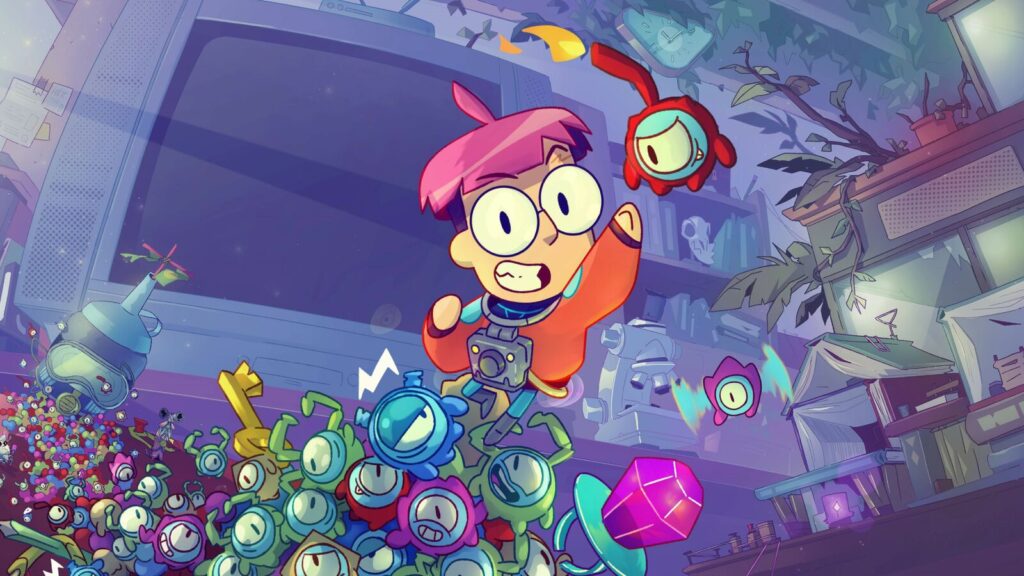 A fun Pikmin-like with tight platforming, cute critters, and a cluttered house full of exploration potential.

Being shrunk down to the size of a thimble would be my absolute worst nightmare. Think of all the dirt and clumps of dust you’d be grossed out by, and don’t even get me started about being outside. Giant horrific insects? No thanks. I’m already emotionally scarred from the giant bug puppets in Honey, I Shrunk The Kids, and it’s the reason I won’t ever play Grounded (soz Obsidian).

Thankfully, Tinykin takes a more whimsical approach to this hellish situation. It’s a sci-fi adventure platformer where you and a tiny alien army explore a giant house and, as a bite-size summary, it’s excellent. Splashteam have made a fun, laid-back Pikmin-like bursting with humorous surprises and I played the game with a silly grin on my face the entire time.

In Tinykin, Earth has been long abandoned and humans have since moved to another distant planet. However, a young scientist named Milo has excitedly re-discovered the great blue planet and, in a flurry of joy, teleports to his discovery only to realise that, yes, it is Earth, but he’s now an inch tall stuck in a human-sized house. Playing as Milo, you need to get back home by collecting parts of a spaceship that are scattered around the different rooms of the house, and to do that you’ll need the help of some small, squishy alien creatures – the tinykin.

The cute tinykin are extremely helpful, as it turns out. There are hundreds of little eggs dotted around the house, and moving past them will cause the tinykin inside to hatch and start following you around, joining your growing alien army. Each critter has a colour that aligns with a special ability that makes traversing the house a whole lot easier. The pink tinykins are incredibly buff, making them perfect for heavy-lifting, red tinykin explode on impact letting your clear obstacles, while green tinykin can stand on top of each other creating a ladder for Milo to climb. There are other kinds but I don’t want to spoil too much, as half the fun is discovering new colours and seeing what they can do. When you complete a task they all cheer, and when finishing bigger missions they flop on the floor for a power nap, which is adorable.

You use your tiny squad to solve puzzles and navigate this incredibly big world, and using them is as easy as aiming and lobbing them at a task. There are times where you’ll come across an obstacle where you don’t have enough tinykin to complete the task – this could be a matchstick gate that needs burning away, a giant mug that needs moving, a way to cross a treacherous water-filled sink – so you’ll need to go find more to add to your army. Don’t get too trigger happy though, as certain tinykin like the red ones explode on impact, meaning they’re gone forever – so you’ll want to keep an eye on how many critters are in your ranks.

Coming across an obstacle that you can’t get past might seem annoying at first, but in Tinykin it means more exploration and poking around. It’s pretty cool how Splashteam have turned the most mundane objects in a cluttered house into climbable structures and walkways. You’ll be scrambling along the leaves of houseplants, crawling inside the mechanical innards of a VCR machine, jumping on the rotating blades of ceiling fans, and abseiling down the sides of cupboards ready to make the perfectly timed jump and find out what lies inside. The platforming is perfection, with super tight controls.

Every room of the house has been taken over by a different bug civilization with each one possessing a component for your spaceship. In exchange for each part, you’ll be helping them out with their problems, all the while exploring the nooks and crannies of this giant world. In the bathroom level, a group of silverfish wants to throw a foam party and send you on a fetch quest to retrieve a shopping list of items. In the living room, the beetle civilians want to listen to a CD that contains the song of their people, which means clearing a path from one end of the room to the other. It’s super laid-back puzzle solving and never anything more difficult than a brain tickle.

Traversing is also made more fun with Milo’s gliding bubble letting you gracefully float over large gaps, and his soap board that helps you speed across the floor, your tinykin bounding behind you. There’s a huge focus on exploring the world and encouraging you to poke around. One of my favorites secret discoveries was jumping into the body of a guitar and finding a tiny bug bar inside. There’s also the option to collect little golden clumps, of which there are hundreds throughout each level. They’re so shiny and irresistible and if you collect enough you get to upgrade your bubble glider.

There’s not a lot of depth to Tinykin but that’s actually pretty nice. There’d a lot of fun to be had just being a tiny dude in a huge house. With satisfying platforming, cute little critters, and plenty of exploration surprises it’s the perfect bite-sized adventure. With a four-hour run time, I played it in two sittings and it was perfect for some laid-back gaming. It’s great to see how Splashteam have taken the core inspiration of what made the Pikmin games so enjoyable and have infinitely improved on it. A solid recommendation.