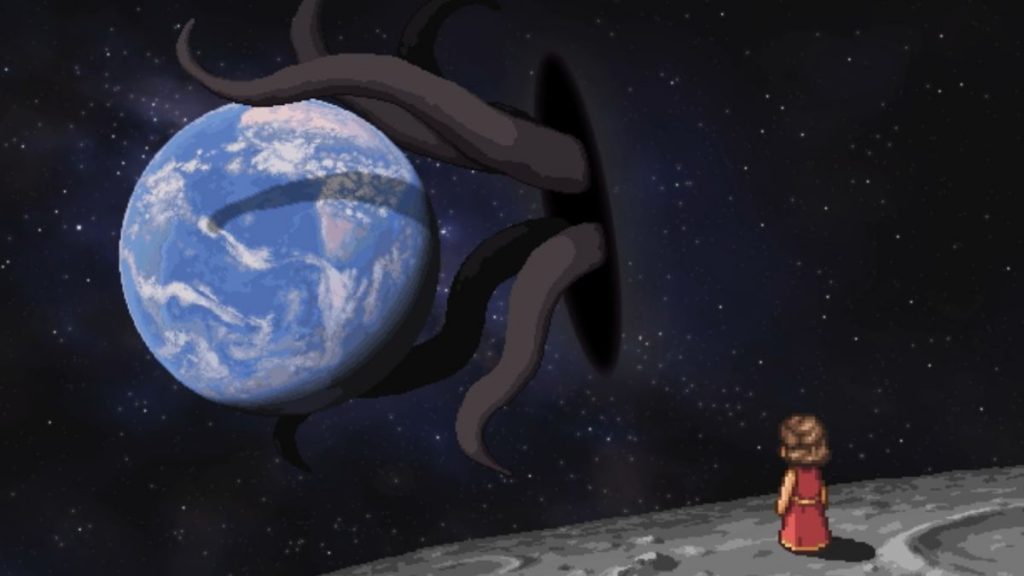 After being announced back in Ye Olde 2019, To the Moon 3 finally has a release date. The third game in the cult hit adventure series releases on September 30, 2021.

The first To the Moon, released in 2011, was a weirdly touching narrative adventure following two doctors who Inception their way into a dying patient’s memories with the goal of rewriting them to fulfill his last wish. We got a sequel called Finding Paradise in 2017 that followed the same doctors with a new patient. To the Moon 3, dubbed “Impostor Factory,” is evidently quite darker in tone. It still follows the good Drs. Watts and Rosalene, but this time they’re dealing with a man named Quincy as he lives through a time-looping murder mystery in a mysterious mansion.

Judging from the trailer, things will get even weirder when Lovecraftian tentacles reach through a portal and approach Earth. The game’s Steam page says that’s just one-third of what Impostor Factory is about, but I’m already intrigued if Cthulhu detective work can make me cry like the original. Thankfully, Freebird says that you don’t have to play the previous games to appreciate this one.

If it’s been a hot minute since you thought about developer Freebird Games’ stories, they’ve previously released comics following Dr. Watts and Rosalene, and plan to release another comic alongside Impostor Factory’s launch. You can wishlist Impostor Factory on Steam now.

If you’re a fan of narrative adventures, I really recommend playing the whole series. The PC Gamer crew even considers it one of the finest video game narratives out there. Considering the original came out literally a decade ago, it was part of the first wave of indies that really dared to explore very different kinds of stories in very different ways, two years before games like Gone Home or Dear Esther established certain genre tropes. The bones of the game were built in RPG Maker, but that never holds it back from eliciting some genuine emotion from its pixel art characters, and I guarantee you won’t be able to tell where the story is going from moment to moment. I’ve yet to play Finding Paradise, but apparently, it’s been sitting in my Steam library for some years, so I know what I’m doing this week.