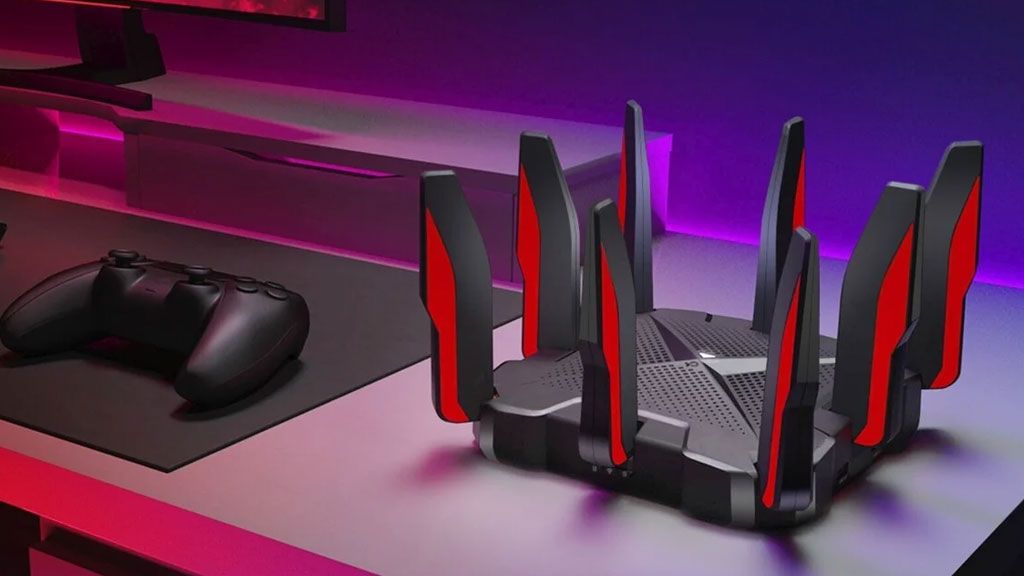 It took a minute to finally make it to market, but TP-Link’s Archer GX90, an AX6600 tri-band Wi-Fi gaming router that was first announced at CES back in January 2020, has now officially arrived. It brings with it some notable upgrades over TP-Link’s Archer C5400X, one of the best routers for gaming, and a potentially attractive $250 MSRP.

I say “potentially” because I haven’t spent any hands-on time with this model, though if it lives up to its billing as a high-end router for gaming, that would be a fair asking price. The spec sheet is encouraging, though not class-leading.

Tri-band routers like this one offer up three separate bands and SSIDs that you can connect your devices to. They include a 2.4GHz band with a theoretical maximum throughput of 574Mbps, a 5GHz band rated to deliver up to 1,201Mbps of throughput, and another 5GHz band that expands into a 160MHz channel width, effectively opening the throughput pipe to 4,804Mbps.

The fattest pipe is what TP-Link is billing as a “Game Band exclusive for your gaming rigs,” the idea being you can keep your gaming traffic completely separated from everything else on your network. There’s nothing that would prevent you from putting other types of devices on that band as well, if you wanted to.

TP-Link offers up a few other gaming amenities, like a Game Accelerator feature that automatically detects and optimizes gaming streams to ultimately reduce latency and boost speeds. There’s also a game statistics section on the UI dashboard that serves up real-time latency and game duration details, which I suppose could be helpful if you feel like something is off when gaming.

One feature that falls squarely into the marketing fluff category is “Game Protector.” This essentially refers to TP-Link’s HomeCare package, which itself is a combination of a built-in antivirus scanner, QoS triggers, and parental controls. That’s all fine, though if there’s anything about this that is specifically tuned for gaming, TP-Link doesn’t make that clear.

For wired connections, the GX90 offers up a single 2.5Gbps LAN port and three 1Gbps LAN ports. It also has a USB 3.0 port and a USB 2.0 port for sharing external storage or a printer over your network.

In theory, the GX90 should cover a large area. Part of the gaudy design entails eight chunky external antennas. It reminds me of some of the Asus ROG Rapture models, none of which are inconspicuous.

Hopefully it performs as aggressively as it looks. If so, this could be a viable option, especially considering that several models with similar specs cost quite a bit more, like Netgear’s AX6600 ($330) and the Asus RT-AX88U ($290). And in the ultra-premium range with even more throughput on tap, some models like Netgear’s Nighthawk AX1100 and Asus ROG’s Rapture GT-AX11000 can command in the neighborhood of $450 to 500.

TP-Link says the Archer GX90 is available now at Amazon and other retailers. I’m not seeing it listed quite yet, but I imagine stock will show up soon.