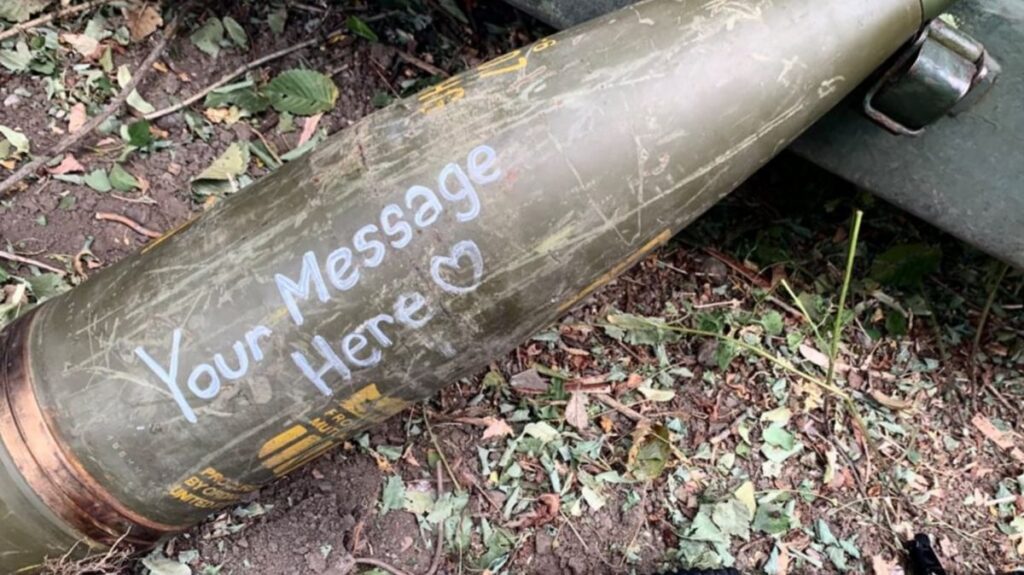 Ukrainian development studio Frogwares is wrapping up its Kickstarter for Sherlock Holmes: The Awakened (opens in new tab) with an unusual and controversial promotion: A raffle to have a personalized message written on an artillery shell that will be fired at invading Russian forces in Ukraine.

The Kickstarter campaign (opens in new tab), which ends on September 3, is already a runaway success, having raised nearly €230,000 on a €70,000 goal. To help give it a final push, fans of the studio currently serving with the 24th Separate Assault Battalion of the Ukrainian Ground Forces reached out with the idea of giving three fans a shot at having a message of their choice written on a 152mm howitzer shell, just for liking and sharing a link to the campaign on Twitter.

Message can be anything you want, but subject to our team’s approval.Winners will each get a photo of their message on a shell, proudly presented by our troops. pic.twitter.com/b7vAYEui4NSeptember 1, 2022

The tradition of putting messages on munitions goes way back. Task and Purpose (opens in new tab) notes that it’s been common practice in the US military since the WWII, but you can go even farther back than that, all the way to the days of ancient Greeks and Romans (opens in new tab). Despite that, several responses on Twitter to Frogwares’ message are critical of the offering, accusing the studio of glorifying violence and gamifying real war.

“Talk about being tone deaf,” Twitter user MrInspirer (opens in new tab) wrote. “That shell has a non zero chance to land next to a civilian, that’s an unfortunate nature of artillery. So go a head folks, donate your money to write some cringe text on something that will kill some kid.”

Another Twitter user, Brutal1ty512 (opens in new tab), replied, “You are animals and all your games should be pulled of the shelves worldwide if this is your idea of PR. Worst of luck to you and your joke of a country.”

tell me this is a joke? This isn’t to be used to potentially KILL and MAIM people?September 1, 2022

This is a terrible idea. No matter who’s right or wrong in this conflict, you are incentivizing gamers to be a part of the violence.September 1, 2022

In a message sent to PC Gamer responding to those accusations, Frogwares was unapologetic.

“Please understand we as a team are literally in the centre of this war,” the studio said. “We have people on our team who have had their homes bombed into rubble. Some of us have lost relatives. Some of us are in occupied areas like Kherson where they are trying to annex the city [to] say it is now a Russian city. We have team members who lived near Bucha (opens in new tab). We have team members who fled their homes in Donbas in 2014 and then had to flee again in 2022. Others are actively fighting. Others have been forced to flee to countries around the EU and leave behind their families who couldn’t come with them.

“We are angry. We are hurt. Our entire lives were thrown into hell because of Putin who used the term ‘Nazi’ as a dog whistle against our entire population and sent his troops in.”

The soldiers in the video who suggested the promotion “are actual friends of ours,” Frogwares added. “Six months ago they were normal people living in Kyiv having normal day jobs, homes and families. After February 24th they decided they had to leave all that behind and signed up to defend their homes and families.”

Frogwares also addressed questions about the 24 Separate Assault Battalion itself. Also known as the Aidar Battalion, the unit was originally formed as a volunteer unit following the first Russian invasion of Ukraine in March 2014. Within months, the unit faced accusations of war crimes leveled by both Amnesty International and the OCSE; multiple members of the battalion were also charged with criminal offenses by the Ukrainian military. Aidar was disbanded in 2015 and then reconstituted around a selection of former members as the 24th Separate Assault Battalion, under the 10th Mountain Assault Brigade—part of the regular (and, presumably, more disciplined) Ukrainian military.

“Where they got assigned is where they were told to go,” Frogwares said of the soldiers in the video. “They didn’t get a list of units they could pick from. But more important, whatever history and command structure the unit has from when it was formed by volunteers back in 2014 is gone. That unit was disbanded in 2015 and under the watch of the armed forces was rebuilt and integrated into the actual armed forces.”

Kickstarter prohibits projects from raising funds toward a charity or “cause,” and it also prohibits projects under the subject matter of “Weapons, replicas of weapons, and weapon accessories.” The Sherlock Holmes game is neither a weapon nor a cause, so running a promotion adjacent to its Kickstarter campaign skirts these rules. Kickstarter confirmed to me via email that the promotion does not violate its rules.

From Frogwares’ perspective,  the company is using a videogame to remind the world that Ukraine—its home country—is still waging full-scale war for its very existence. And the Ukrainian military has leaned heavily into crowdfunding since the beginning of the second invasion earlier this year—in fact, it’s been possible to pay to have messages written on Ukrainian munitions (opens in new tab) and military hardware for some time now.

As for Sherlock Holmes: The Awakened, the Kickstarter campaign will end on September 3, and Frogwares said that it hopes to have the game ready for launch in February 2023. “But we want people to understand that anything could change, be it in the country as a whole or just internally with our own team to force us to release later,” producer Denys Chebotarov said. “The priority will always need to be the safety and ability of our team to work above all other choices on when to release.”