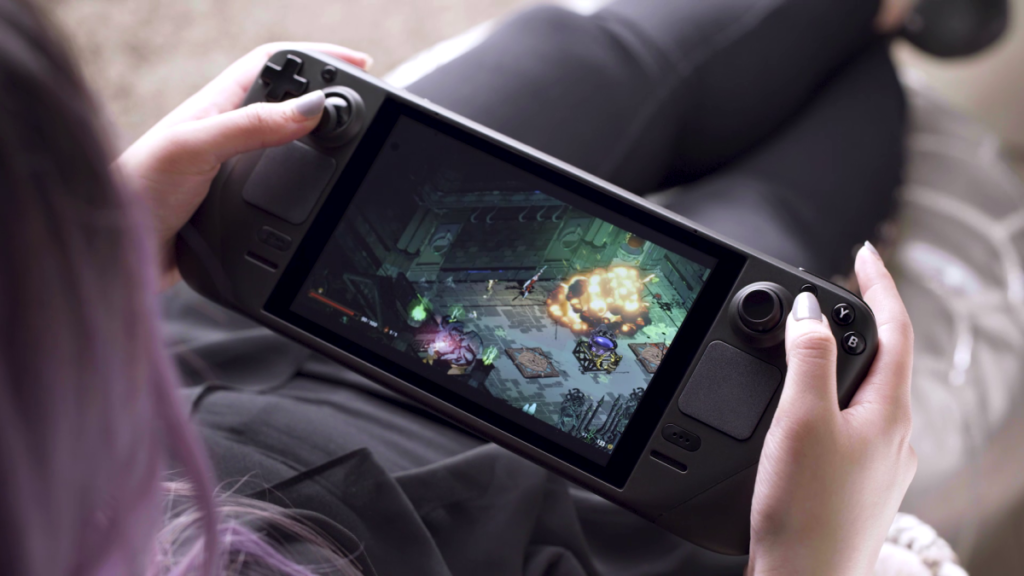 After the announcement of the Steam Deck, Valve’s take on a handheld PC that can play anything in your Steam library without port work, I’m running out of reasons to ever give Nintendo money again.

With everything the Steam Deck purports to do, the reasons I maintain for owning a Switch are dwindling, to the point where I just wouldn’t buy one if I didn’t already have one. We’re down to three: Mario, Metroid, and Zelda. Before the Steam Deck, I might’ve included the novelty of playing a few choice indies in bed or on some cool grass.

But based on what we know about it so far, nothing else about the Switch stands up to the Steam Deck, and the open nature of the Deck only highlights how slow and stubborn Nintendo’s hardware, software, and online networking have been for about as long as I can remember. A new Zelda game every couple years just isn’t worth buying a low-spec tablet for anymore, so if the Deck does everything Valve says it will and well, I’m putting Nintendo on ice for good.

Nintendo will always have its first-party games to lean on, but that’s literally all it has anymore, not just in the console market but in the handheld market, which has been Nintendo’s turf for decades. The Steam Deck even mirrors Nintendo’s usual hardware gimmickry, slotting into a dock for play on TVs or monitors.

Your Steam purchases will always be there too, playable from here into the end of modern civilization on whatever can run SteamOS. Just think about it: the Deck can run every Steam game. Do some rough math and add up the cost of every game in your Steam library. That’s how much you don’t have to spend on the Switch to take those games with you. I’ll have over 1500 games to play in bed or at the park or at bar, day drinking while noodling around with the latest Baldur’s Gate 3 update, from day one.

It makes the thought of buying Skyward Sword a second time, a 10-year-old game and one of the lesser 3D Zeldas, at $60 truly sting. It’s straight up mean, especially when you think about all the classic games Nintendo is sitting on that you can’t play on the Switch today. Wild, to think that I’m better off emulating Metroid Fusion on a PC—also possible on a Steam Deck, more on that in a minute—than ever expecting it to release on a Nintendo system ever again

Anyone can find the essence of Nintendo’s games on PC pretty readily. Hollow Knight is a better Metroid game than Super Metroid. Fire Emblem’s tactical battles and melodrama are right there in Wildermyth and XCOM. There are a dozen great platformers on the PC for every Mario game, from 2D greats like Super Meat Boy and Celeste to 3D takes like A Hat in Time and Psychonauts.

The systems-driven Breath of the Wild is basically an open world expression of the immersive sim, which you can play the entire history of on PC. Deus Ex, Prey, Cruelty Squad, Vampire: The Masquerade – Bloodlines, and dozens more. Animal Crossing is covered by The Sims on PC, with indie spins on the life sim genre en route via Ooblets and Hokko Life. Advance Wars has Wargroove, Into the Breach, and Valkyria Chronicles. Pokemon has Monster Hunter Stories 2 and TemTem. There isn’t a single Nintendo game that doesn’t have an equal on PC.

But the best part? Steam games are far more affordable than Nintendo games. Nintendo’s first-party games rarely dip below 50% off, even years after release. Any game I already own and want to play on the Switch means buying the damn thing again, often at a higher price than on PC. Today, it costs $180 to buy Breath of the Wild, Super Mario Odyssey, and Fire Emblem: Three Houses, all released over a year ago.

Compare that to the last Steam sale, where I put together my own bundle of PC Gamer’s Game of the Year winners over the last eight years for $100. Whether you buy the Deck’s base model at $400 or the 512GB model at $650, the OLED Switch at $350 really isn’t much cheaper, and you’ll make back the difference several times over through what you save on games.

The Deck has better hardware, software, and online features

It’s difficult to remember playing games without a vibrant social group to hang with in-game or on Discord, but I often do remember because every time I play a Nintendo game I’m punted back to isolated 1998 gaming. I’m still in awe of Nintendo’s total fumbling of basic online functionality in 2021, a year where fridges and picture frames have better ways to talk to friends.

With the Steam Deck there’s no need to pay for online functionality, not that Nintendo’s online services are useful to begin with. To chat with friends while playing Switch games, you need to use Nintendo’s app on a smartphone. Adding friends requires exchanging what amount to phone numbers. There aren’t any third-party apps like Discord to install either. Nintendo locks their hardware down, masquerading limitations as conveniences. I have no hope of ever playing a game with my friends on a Nintendo console. Xbox Live was doing it better back in 2004.

Meanwhile, the Deck does everything the Steam client does: voice chat and text chat, friends lists with custom tagging and sorting features, groups to join and curators to follow. In Steam I can easily invite friends to games, stream my games to them, or even play certain games with them remotely.

And if I don’t like what it’s doing, Valve confirmed that the Deck can handle pretty much anything that can run on a PC. You can browse the web, watch Netflix, install Windows, play Fortnite via the Epic Games Store, talk with friends on Discord, play all the games you can’t play on a Switch but should be able to with emulators, and so on.

Not that the Switch could handle all that stuff anyway. The Switch isn’t a very powerful system, and every purchase requires some research beforehand to make sure I’m gonna be okay with whatever framerate and hitching the reviewer runs into. Games that run beautifully on low-spec PCs run horribly or look awful on Switch, like Bloodstained and The Witcher 3. The hardware was surprisingly capable in 2017, but Nvidia’s custom Tegra processor hasn’t aged gracefully.

Yeah, I’ve seen Monster Hunter Rise, so clearly it can handle plenty of great-looking games, but there’s no denying the Switch has a low ceiling. Even Nintendo’s own The Legend of Zelda: Link’s Awakening has horrible frame drops. Some companies are selling streaming-only versions of their games in the store because the system simply can’t handle them. I’m trying to imagine purchasing a license to beam Hitman 3 and Control into my Switch, getting pissed at spotty wi-fi and squinting to read the tiny text artifacting from connection hiccups.

The Deck’s hardware should place it near the power of a PS4 or Xbox One, though we’re curious to see how it handles more demanding games like Hunt: Showdown or Red Dead Redemption 2. Valve says it can play “the latest AAA games”, so we’ll have to take their word for now. Either way, with those specs it ought to handle the bulk of the best games over the last decade or two without issue. A couple short clips accompanying the announcement show Doom Eternal and Star Wars Jedi: Fallen Order looking nice, which is a pretty good indicator of what to expect. It’s all looking much better than what I play on my Switch, at least.

The Deck is open to whatever peripherals work on your PC too. Bluetooth functionality means wireless headsets are a go, and a couple USB-C ports mean I can bring my fancier wired headset to bed too. Docked or not, you can plug in a mouse and keyboard, Xbox controllers, PlayStation controllers, and, yes, the Switch Pro controller. I won’t have to buy any ridiculously priced proprietary accessories to get the most out of the Deck. It’s a damn computer, it’s in your lap, and it doesn’t cost a fortune. Valve finally made a portable PC I actually want.

I’m not saying the Steam Deck will flat-out replace the Switch. The nieces and nephews of the world don’t want or need a bulkier system that doesn’t run Super Smash Brothers and weighs more than their head. But for hobbyists that aren’t married to Nintendo exclusives, don’t want to buy every game twice, and are dying to play PC games anywhere but a desk, the Steam Deck is looking like a dream.