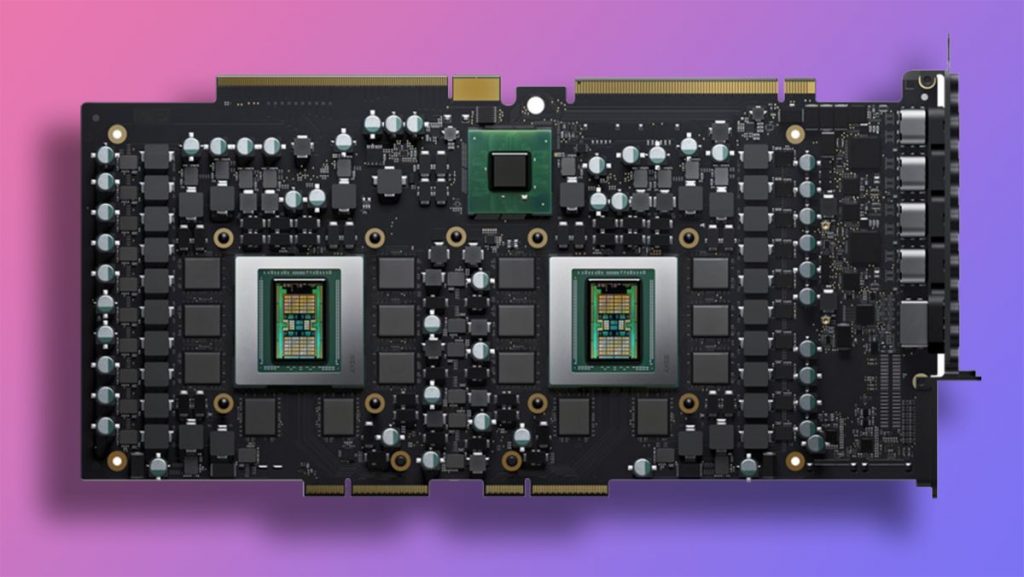 One look at the Radeon Pro W6800X Duo and you might be wondering, what happened to the chip shortage? Well, it’s still ongoing, but it seems AMD saved up a stash specifically for this dual-GPU RDNA 2 powerhouse before you today. Built for Apple’s Mac Pro, the Radeon Pro W6800X Duo comes with two discrete RDNA 2 GPUs tangled together with AMD’s Infinity Fabric interconnect.

Is this the most stunning PCB in PC hardware today? For me, it’s a toss-up between this and the Intel Hades Canyon NUC PCB, which is a mini PC marvel if ever there was one. That also featured AMD Radeon graphics, funnily enough, but falls some distance short of the performance on offer from the Radeon Pro W6800X Duo.

Where the Radeon Pro card differs from Radeon gaming cards is memory capacity, which is standard procedure for a workstation card such as this. There’s 32GB of GDDR6 memory per GPU on the W6800X Duo, for a total of 64GB.

All mounted on a single PCB. That means components such as VRM, MOSFETs, capacitors, and all the traces within the PCB must also be doubled.

All of which sounds exceptionally hot and thirsty, and you’d probably not be wrong. That’s why the W6800X Duo is fitted within Apple’s MPX Module, which is a specially-built unit that slots inside the Mac Pro and incorporates up to 500W of power and Thunderbolt 3. Its height is predominantly made up of a heatsink, which takes advantage of the Mac Pro’s triple-fan design to keep both chips cool.

Then you get to the truly wild bit: Apple will sell you a Mac Pro with two MPX Modules inside it. That’s four GPUs inside a single machine.

‘Why?’, I hear you ask. The benefit of such a setup is not only raw compute power, but also more bandwidth to match. Each W6800X Duo includes an Infinity Fabric connection that straddles its two GPUs—one and the same with the interconnect used to bridge chiplets within AMD Ryzen Zen 2 and newer processors. It’s the bandwidth on offer with that connection that offers high performance between the two GPUs and will save time when running compute-heavy tasks.

Sadly, the days of dual-GPU gaming graphics cards have passed. Where once drivers were built to satisfy the needs of users running either dual-graphics card or dual-GPU systems, that’s not often the case today. In short, this Radeon Pro Duo isn’t going to suddenly make the Mac Pro a gaming monster. It might be a monster for making games, at least.

Yet that’s not to say we won’t see something similar in our gaming PCs. AMD is rumoured to be producing a graphics card with chiplets, one that might just blur the lines of what constitutes a single GPU.