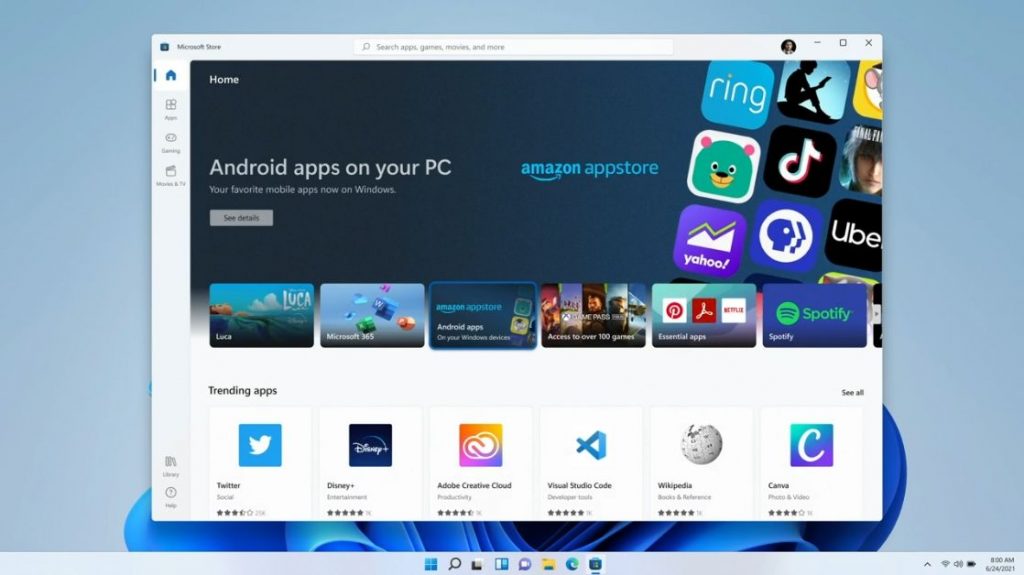 Back when Microsoft did its big Windows 11 reveal, one of the surprising announcements was that it was bringing native Android support to its OS. Apps that act just like normal Windows apps—can be attached to your start menu, moved around, and generally treated like they are native x86 entities.

In order to make that work, Windows 11 will need an Android Subsystem, which is something that has just rocked up on the latest developer Insider Preview. It doesn’t do much at the moment, but this is what will enable developers to play around with Android Apps in Windows.

This is possible thanks to Intel Bridge technology, which does the hard work to allow those android apps to run natively on x86 hardware. Don’t worry, this isn’t something that will only run on Intel’s hardware either, it’ll run just fine on your AMD PCs.

The revamped Microsoft Store will be getting this support via a collaboration with the Amazon App Store. As we said at the time, it’s interesting that Microsoft decided to work with Amazon for this and not Google directly. Amazon’s App Store has a smaller selection of titles compared to Google’s, although all the most common apps are present and correct, and it’s in a much healthier place than it was a few years ago—something that will surely only get better with this deal.

You don’t have to wait until Windows 11 is launched to run Android Apps on your machine, as you can already do so thanks to BlueStacks, which runs most apps and games without much problem. The latest version, BlueStacks 5, runs well on modern hardware, and even supports macros and various rendering systems to help make sure your games run.

Windows 11 will be released on October 5. So not long until we see how native Windows 11’s Android implementation compares to the alternatives.