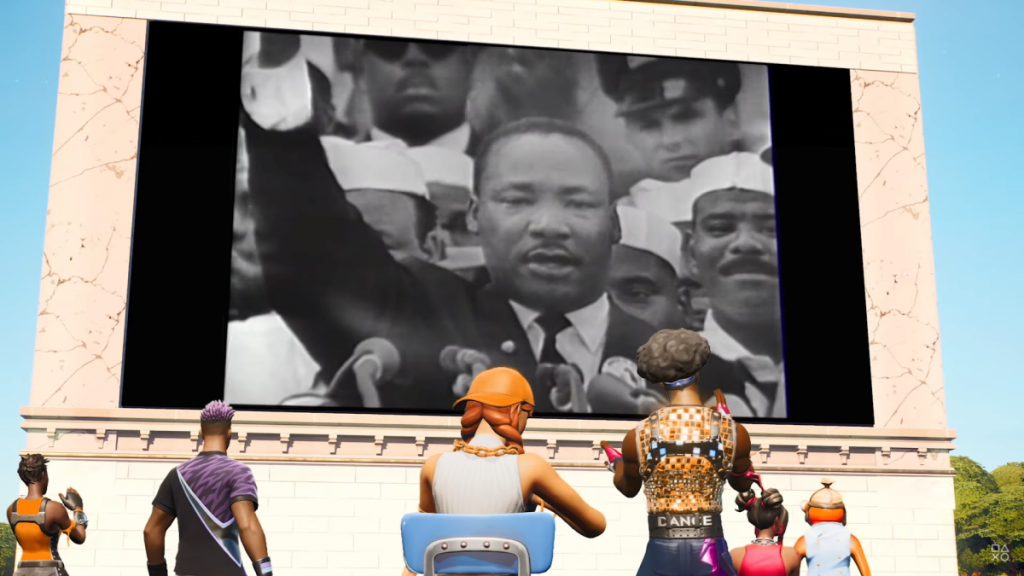 Fortnite has at this point gone far beyond being a game. The strategy Epic has pursued since the breakout success of the game’s BR mode has only become more voracious over time and can be fairly summarised as: absorb everything. Whether that’s the most popular musical stars of the day delivering virtual concerts or continuing to rip off other popular titles for its own modes, the goal is to make it seem like nothing’s really a trend until it appears in Fortnite.

The platform’s newest collaboration is perhaps the most bizarre, if well-meaning, we’ve yet seen. Fortnite has now launched a new interactive experience called March Through Time, in collaboration with Time Studios, which is based on 1963’s March on Washington for Jobs and Freedom. This was a huge civil rights gathering and won widespread public support, helped more than a little by Dr. Martin Luther King, Jr. delivering his most iconic speech about the cause: “I have a dream that my four little children will one day live in a nation where they will not be judged by the color of their skin, but by the content of their character.”

March Through Time is set in ‘D.C. 63’, a reimagined Washington, DC built by Fortnite creators ChaseJackman, GQuanoe, XWDFr, and YU7A. Players can visit the Lincoln Memorial, the United States National Mall (where Dr. King gave his speech) and various museum buildings containing media about and from the era. There are also collaborative mini-games, which apparently “progress players through the experience and bring to life important themes of Dr. King’s speech: we move forward when we work together.”

The press release from Time Studios mentions this is loosely linked to a 2020 VR experience called The March, and the company’s president Ian Orefice writes: “TIME Studios’ mission is to embrace innovative new formats to tell the world’s most impactful stories. We are thrilled to introduce our first-ever gaming experience […] the global, educational event March Through Time in Fortnite Creative.”

There is something slightly crackers about seeing such an historical moment and figure within the frame of Fortnite’s world: especially ironic when creator Epic is still involved in a lawsuit alleging appropriation of Black artists’ dance moves. On the one hand, Fortnite’s characters just look like they don’t belong next to the real Dr. King. But on the other, Fortnite’s one of the most popular platforms in the world, and this is an event that everyone should know about.

Then there’s the problem that, well, this is a game about shooting, and Dr. King was assassinated by a gunman.

I mean, this is the loading screen I got when I quit out of the March Through Time instance.”Aim for the head” is a helluva thing to tag on the loading screen for a tribute to MLK. And granted, it’s random, and it’s unrelated to the event but… that’s my whole point. pic.twitter.com/Js5ZFVnBM4August 26, 2021

That’s an unfortunate coincidence, and something that will surely be patched out quick, but it speaks to a wider unease about these sorts of collaborations. Does an event like this, regardless of intentions, lift up and highlight this historical moment to the world, or by placing it in such an absurdist context is the weight and meaning trivialised? I don’t have the answer but, at the moment, it looks like Fortnite doesn’t either.