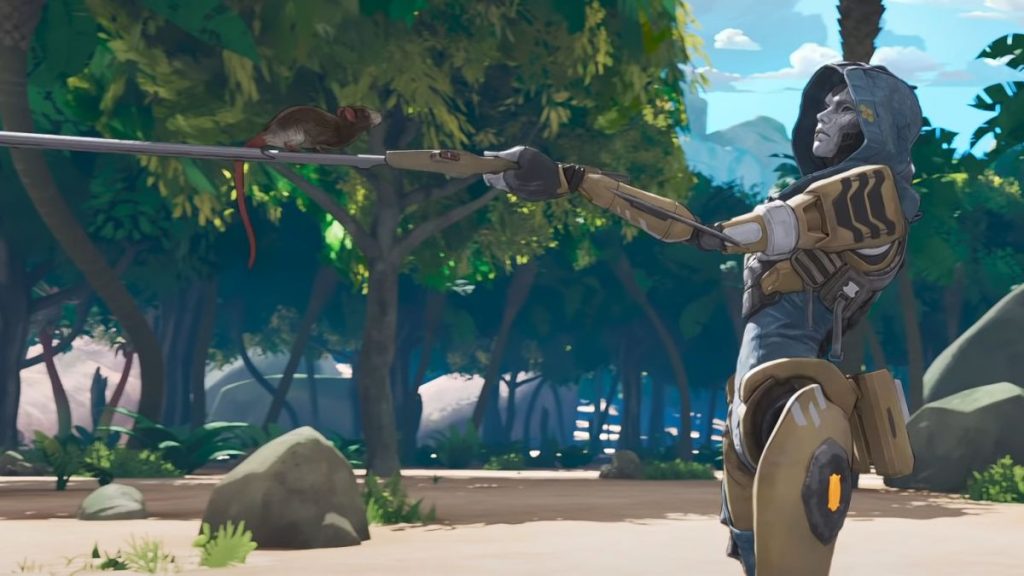 Apex Legends’ next hero, Ash, is a cold and calculating killer. A merciless simulacrum with an unfeeling metal heart. But since her reveal, Ash has been frequently shown carrying around a pet rat, feeding it cheese and let it scamper around her metal body. As far as videogame rats go, they’re a real cutie.

And yet, we still haven’t got a proper name for her rodent pal. We probably never will either, with lead animator Moy Parra explaining on Twitter that the animators deliberately requested the rat never be given a name.

Each one of these “sidekicks” has a particular relationship with each of their respective legends, usually one of affection and care ❤️This time around we wanted to stay true to the character of Ash who wouldn’t show much affection to anyone or care about naming her rat ?October 27, 2021

Parra compares the rat (who we’ll refer to as “The Rat”) to other so-called sidekicks, each of which has a special place in their Legends’ hearts. Horizon cradles Newt like a child, Rampart flirts with her minigun Sheila, and Bloodhound holds a strong familial partnership with their raven Artur. But The Rat is partner to an unfeeling robot, and Parra suggests that naming it could cause them to start feeling affection for it—an affection that risks bleeding into Ash’s animations.

“Ash’s rat serves an important purpose,” Parra continued. “It allowed us to show a bit of humanity from the character, without compromising the character itself. Ironically, it is the rat that shows the more warm/human side, the side that Ash herself will never show!”

That said, Parra actively encourages fans to come up with their own names. His current favourite is Ronin (a reference to Ash’s Titan in Titanfall 2), though Dust also seems a popular candidate. Personally, I’m firmly behind artist TheKittyKat’s somewhat cheesy suggestion below.

Apex Legends’ next season, Escape, launches next Tuesday, November 2. That should give you plenty enough time for your own squad to come up with a name for the cheeky rodent.