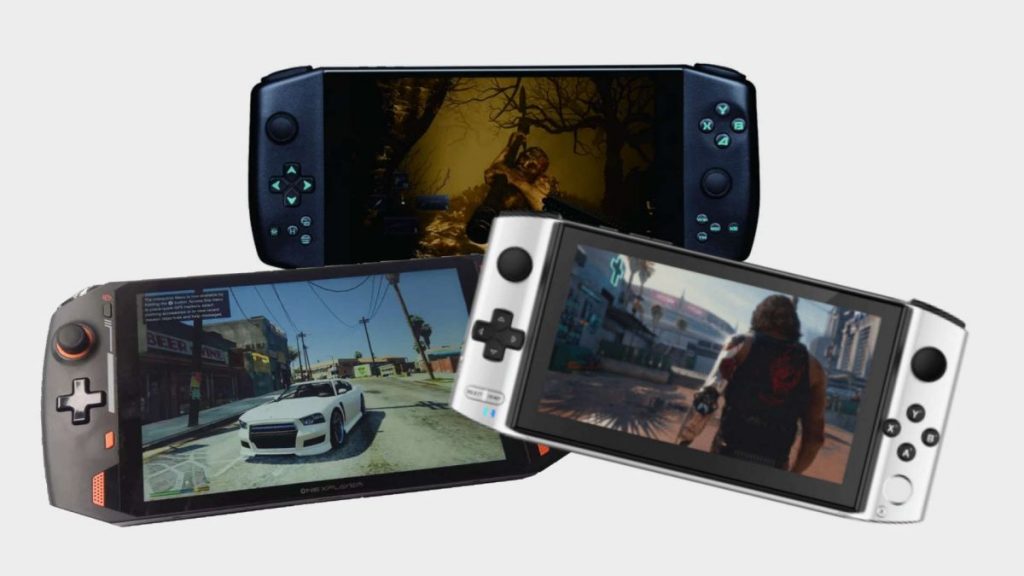 Some of us will take any opportunity to bring our game libraries out of the house, and perhaps the best way to keep your Steam library close at hand is a handheld PC.  Whether the popularity of handheld PCs comes as a result of the lack of desktop silicon available at the moment is hard to say, but Valve’s recent announcement of the Steam Deck was such a hit it’s hard to ignore the trend. In fact, just moments after the $5 reservations went live, the Steam Deck page of the Steam store was so overwhelmed it stopped working.

In the fallout, we’re faced with a sad outlook in terms of Steam Deck availability. New reservations placed for the 64GB Steam Deck won’t ship until early 2022, and as for the two higher-end Steam Deck models, buyers shouldn’t expect to have one in their hands until July 2022 at the earliest.

If you’re one of the many who missed out on the early Steam Deck reservations, and are still looking out for a handheld console to play your PC games on, never fear! There are some more immediate alternatives floating around.

With each of the handhelds we’ve rounded up below, what you’re getting is a fully functioning Windows 10 PC gaming device with the ability to take any game library you would have on your desktop with you wherever you go. These may not be super powerful machines that’ll see your frame rates soaring in the hundreds, but they can fit in the palm of your hand—if you have particularly big hands, anyways. Nevertheless, these sorts of devices are much more viable for gaming on the go nowadays.

Some of these, having been the result of crowdfunding campaigns, may not be the easiest task to find new and unused, but they are at least available before the middle of next year.

We touted the GPD Win 3 as the Switch alternative we’d been waiting for before the Steam Deck popped up. It’s a modern handheld PC gaming device, and a worthy contender to the high-end Steam Deck models, though it comes in at around double the price.

In terms of gaming performance, the Indiegogo page reckons the Core i5 and i7 models can average 42fps and 49fps respectively in Microsoft Flight Simulator, as well as 47fps and 61fps in our favoured benchmark game Metro Exodus. It doesn’t note what settings were used in testing, however. At 720p that’s entirely possible, though probably only after tuning the graphics setting to low.

The Aya Neo was marketed as the world’s first 7nm handheld gaming device. Having gone on sale in March, it’s another relatively modern option, and comes with the red team’s Zen 2 architecture, for the AMD enthusiasts among us.

As for gaming performance, this 720p device is said to be able to handle Cyberpunk 2077 at low settings at 20fps, according to GBAtemp. It even managed Horizon Zero Dawn at around 30fps on average, and Outriders at 23fps on low/medium settings.

So while it’s not going to pump out AAA games at breath-taking frame rates, you can at least grab the Aya Neo right now on the official store for $925, or $1,015 for the higher storage capacity model (taxes not included).

Aya Neo | AMD Ryzen 5 4500U | 512GB / 1TB | $925 / $1,015 on the Aya Neo store
This AMD Zen 2 device is one for the red team supporters, and comes in at a slightly cheaper price point than some of the alternatives. At only 720p this little machine can manage some pretty taxing games, albeit at lower graphics settings.

The OnexPlayer, which we reviewed earlier this year, is one of the higher resolution handheld PC gaming devices around, albeit the chonkier at 1.8lbs (820g). Backed by a hugely successful Indiegogo campaign, there were three options on initial release: Standard Edition, Pro Edition and Ultimate Edition.

The configuration we tested was a little different to those available, but generally we found it pretty reliable at 720p, though not so much at its native 2560×1600 pixels. With graphics set to low in Shadow of the Tomb Raider it averaged 35fps, and managed 60fps in GTA V. This is the kind of performance to be expected from a handheld device—basically, don’t expect to be playing Cyberpunk at 1600p.

On release, OnexPlayer models went for $1,059, $1,158, and $1,599 respectively, and seeing as the campaign only just ended, the likelihood of finding a second hand one right now is pretty low—the current chip shortage won’t help either.

I’m told there may be plans to get the device on sale for the general public soon, however.