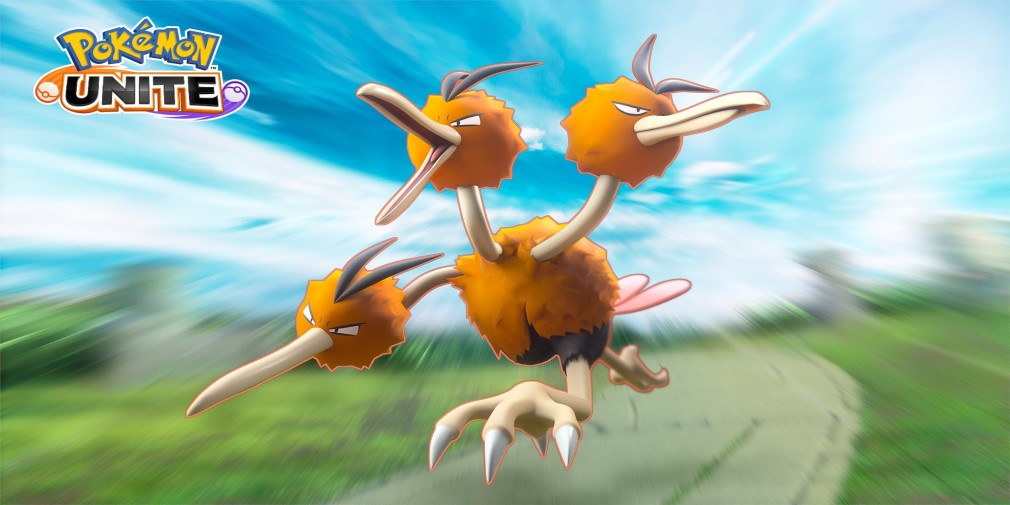 TiMi Studio and The Pokémon had planned quite an elaborate celebration to commemorate Pokémon Unite’s first anniversary. It’s been quite a long event, divided into two phases, with the second recently kicking off. It includes the debut of three Pokémon, a new map, and lots of events.

Today, the party continues as the second Pokémon after Mew, Dodrio, comes to Pokémon Unite. The Speedster with a trio of heads joins the Unite Battle Committee Shop where it can be purchased for 14,000 Aeos Coins or 575 Aeos Gems. It has a sprint gauge that allows it to charge its attacks, dealing extra damage.

At levels one and two, Doduo joins the battle knowing two moves – Peck which moves forward dealing damage and Quick Attack, which increases movement speed while attacking anyone in its path.

Level five will see Doduo involve into Dodrio, a stage where it can upgrade its moves. Tri Attack dishes out damage in a cone-shape while also applying a random debuff and Drill Peck hits the opponent numerous times to lower its HP.

At level seven, it can learn Agility, making Dodrio immune to hindrances while filling the sprint gauge and Jump Kick, which first attacks an opposing Pokémon. After that, it leaps into the air and stomps on the ground, dealing AoE damage.

And finally, we come to Dodrio’s Unite Move, Triple Trample. It runs towards an enemy, launching it upwards. Once it reaches its desired location, Dodrio gains a shield and its attack is increased as well.

Dodrio is the first Speedster to release after Pokémon Unite’s launch. Its agility and ability to disrupt other Pokémon make it perfect for defensive disruption. It will fare well against opponents like Decidueye that are susceptible to being run down. With its quick moves, Dodrio can close in on other Pokémon, forcing them to reposition to perform ranged attacks.

It may be a fast Pokémon, but it will still be weak against a massive opponent like Snorlax. The Sleeping Pokemon is capable of blocking Dodrio’s attacks, launching it back toward its team. The disruptor will end up becoming disrupted.

Dodrio is still however a strong contender to be in your squad. Purchase its license by downloading Pokémon Unite for free.

Also, check out this list of the best MOBAs to play on mobile!