Home » Thanks to fans, the weirdest official Doom game is now playable on Windows

Thanks to fans, the weirdest official Doom game is now playable on Windows 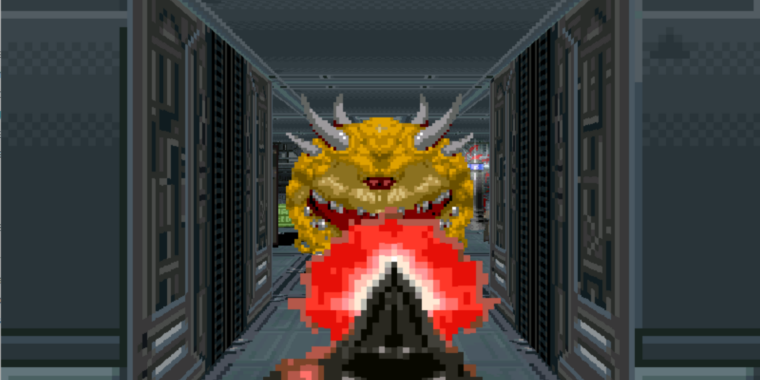 The creators of the Doom series have presented plenty of official and unofficial historical retrospectives, but these often leave out the weirdest official Doom game ever made: Doom RPG.

Even id Software’s official “Year of Doom” museum at E3 2019 left this 2005 game unchronicled. That’s a shame, because it was a phenomenal example of id once again proving itself a master of technically impressive gaming on a power-limited platform. And platforms don’t get more limited on a power or compatibility basis than the pre-iPhone wave of candy bar handsets, which Doom RPG has been locked to since its original mid-’00s launch. You may think that “turn-based Doom” sounds weird, but Doom RPG stood out as a clever and fun series twist to the first-person shooter formula.

Its abandonment to ancient phones changes today thanks to the reverse-engineering efforts of GEC.inc, a Costa Rica-based collective of at least three developers. On Wednesday, the group released a Windows port of the game based on their work on the original game’s BREW version (a Qualcomm-developed API meant for its wave of mobile phones from 2001 and beyond).

GEC.inc’s freely downloadable Windows port has no copyrighted assets and won’t work without the game’s original files. (The same typically goes for other major community efforts that revolve around the reverse-engineering of classic games.) That’s where this whole thing gets tricky, as legitimate access to the game in 2022 is incredibly unlikely. Access requires owning a compatible mid-’00s phone on which the game was purchased, likely via an ancient game-sales marketplace that no longer exists, then extracting the game’s original files from that phone—and that’s assuming its original hardware is functioning and hasn’t been damaged by, say, a slowly expanding lithium-ion battery. id Software has never re-released the game outside of its original platforms (BREW, J2ME), arguably because EA Mobile got a stake in the game after acquiring original publisher Jamdat Mobile.

Whether you’re among the very few to have a preserved, working phone with a purchased copy of the game’s BREW port or you figure out another way to somehow access Doom RPG, you can dump the original game’s data into GEC.inc’s custom asset-translation executable. Ars Technica can confirm that this process is painless and leads to near-instant gameplay on Windows.

The port’s interface is admittedly barebones, made up of menus that require a keyboard to pick through, and its incompatibility with mice and touchpads is startling at first. It’s a hard crash back to the early ’00s to remember that, yes, this game was designed for T9 button arrays by default. Thankfully, the port plays nicely enough with Windows to make it easy to bind an Xinput gamepad via its default menus if you prefer a gamepad (or something like Steam Deck) over the usual WASD options.